OFFICIAL UNEMPLOYMENT: 6.7%*
A year earlier, the number of unemployed persons was 11.7 million,
and the jobless rate was 7.5 percent. [BLS]

*If the LFPR were at its pre-recession level, the unemployment rate in  March 2014 would have been 9.8%  instead of 6.7%. [See “The Labor Force Participation Rate and Its Trajectory”]

**Not seasonally adjusted.
*See Uncommon Sense #4 for an explanation of the unemployment measures, and Is the Decline in the Labor Force Participation Rate During This Recession Permanent?.

In addition, millions more were working full-time, year-round, yet earned less than the official poverty level for a family of four. In 2012, the latest year available, that number was 18.0 million, 17.5 percent of full-time, full-year workers (estimated from Current Population Survey, Bur. of the  Census, 9/2013).

Thus there are 6 job-wanters for each available job.

THE MISSING PART OF THE UNEMPLOYMENT STORY 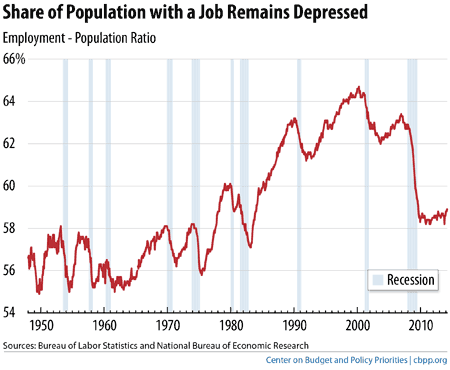 Missing Jobs: How many jobs
we should have had

GDP Fell Far Below What the Economy
Was Capable of Producing

+“The number of job openings (not seasonally adjusted) increased over the year for total nonfarm and private but decreased for government. Over the year, the number job openings increased in several industries while it decreased in real estate and rental and leasing and in federal government. The Midwest and West regions experienced an increase in the number of job opernings over the 12 months ending in January.” (http://www.bls.gov/news.release/pdf/jolts.pdf)