The test of our progress is not whether we add more to the abundance of those who have much; it is whether we provide enough for those who have too little.   — Franklin Roosevelt, Second Inaugural Address, January 1937.

“Put simply, at least half and possibly more of your income is determined by where you live, which for 96 per cent of people in the world is where they were born. Then, about 20 per cent is due to the income level of your parents. So, your citizenship plus your parental background explain around 70-80 per cent of your income. Obviously, if I had data for gender, race, ethnicity and other things that are similarly ‘given’ to an individual at birth, that percentage would go up.” Milanovic, Forbes 3/18

The United States of Inequality: A Timeline,, Kingsley, Capital & Main, 11/19

Who Pays? A Distributional Analysis of the Tax Systems in All 50 States, ITEP 10/18

The Highest-Paid C.E.O.s of 2018: A Year So Lucrative, We Had to Redraw Our Chart, Russell & Williams, NYTimes, 5/19 See ratio of CEO pay to that of median employee

The decline of African-American and Hispanic wealth since the Great Recession, Wolff, 12/18

“shareholder value is the root cause of workers’ stagnant salaries” How shareholder profits conquered capitalism – and how workers can win back its benefits for themselves, Brennan, Conversation, 10/18

Economic justice goes a long way toward improving mental health up and down the socioeconomic ladder, Green, Yes! 9/18

Where in the World Is It Easiest to Get Rich? Why Scandinavia is a better place to fulfill the American dream, Eia, Evonomics

The Enemy Between Us: How Inequality Erodes Our Mental Health, Pickett & Wilkinson, Open Democracy 8/18

Five Powerful Families: We’ve reached the point where a handful of extraordinarily wealthy clans essentially have the power to suffocate our democracy. Lord, IPS 7/18

“In the United States, the chances of acceding to higher education are almost entirely determined by the income of one’s parents; barely 20% for the poorest 10%, and over 90% for the richest 10%.” Piketty blog, 2/18

Why Equality Matters More Than Income, Gershon, JSTOR 2/18 “…high levels of income inequality were correlated with higher rates of infant mortality and low birthweight, teen pregnancy, overweight children, bullying, low math scores, less pursuit of higher education, and a lower proportion of kids who said their “peers are kind.” More equality did have a couple of apparent downsides—in more equal societies, more kids reported feeling lonely, and children were more likely to “aspire to less skilled work.” (The link between equality and loneliness seemed… due to Japan, …with high levels of equality, but also a lot of lonely kids.)”

How Did They Get So Rich? The massive increase in incomes at the top is driven mostly by capital.  Bruenig Jacobin 8/17

The Absurd Amount of Entitlements That Go to Rich People, Buchheit Commondreams 5/17

The Rich Are Living Longer and Taking More From Taxpayers, Steverman,Bloomberg 4/17

America is Regressing into a Developing Nation for Most People, Parramore, INET 4/17

The Big Reason Whites Are Richer Than Blacks in America Inheritance matters a lot more than previously thought Coy, Bloomberg 2/17

Income share for the bottom 50% of Americans is ‘collapsing,’ new Piketty research finds, Goldstein 2/17, Marketwatch  Increased health care spending on the elderly consumes most of the [income] gains. The effects of government assistance vary widely with age, especially within the lower half of incomes. Younger adults between 20 and 45 years old have seen their after-tax incomes flatline. But over the same period, seniors in the bottom half have seen their after-tax incomes grow by over 70 percent. The bulk of that gain represents increased health care spending through Medicare. Piketty et al, NYTimes 12/16

Just 100 CEOs have company retirement funds worth $4.7 billion—equal to the entire retirement savings of the the bottom: 59% of African-American families; 75% of Latino families; 55 percent of female-headed households; and 44 percent of white working class households. Anderson and Klinger, IPS 12/16

Rigged: How Globalization and the Rules of the Modern Economy Were Structured to Make the Rich Richer, D.  Baker 10/16 free

“Inequality made the Great Recession worse (especially for the poor),” Mitman et al, VoxEu 8/16 [see their table on share of income spent by wealth quintile]

Why inequality is worse for your wallet than a weak economy, Review of Blivens, Tankersley, Wash. Post, 6/16 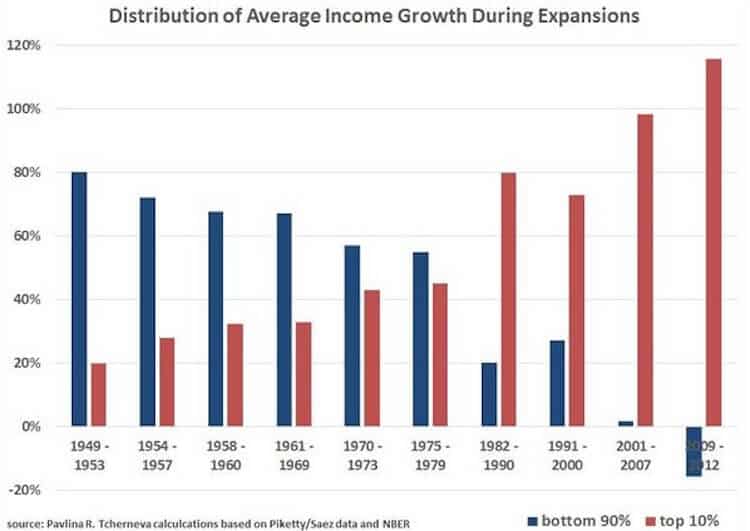 Why The Universal Basic Income Is Not The Best Public Intervention To Reduce Poverty or Income Inequality, Navarro 5/16

Mr. Moneybags Gets More Out of Social Security, Irwin, NYT 4/16

What Do Unions Do for the Middle Class? Freeman et al, 1/16

Why Small Debts Matter So Much To Black Lives, ProPublica, 12/15

A land of opportunity no more: Poor intergenerational mobility in the US is a feature of both the past and present, Olivetti & Paserman, 11/15.

“For African American men without a high school diploma, being in prison or jail is more common than being employed—a sobering reality that calls into question post-Civil Rights era social gains. Nearly 70 percent of young black men will be imprisoned at some point in their lives …. because prison inmates are not included in most survey data, statistics that seemed to indicate a narrowing black-white racial gap—on educational attainment, work force participation, and earnings—instead fail to capture persistent racial, economic, and social disadvantage among African Americans.” Invisible Men, Becky Pettit

Meet the new dating apps that only cater to the rich and the elite, Bus. Insider, 8/15

How Much do you Need to Earn to Afford a Modest Apartment in Your State? Out of Reach 2015

Who gained from income growth? interactive chart on inequality, 1917-2008 EPI

How Much More (Or Less) Would You Make If We Rolled Back Inequality? Bui, NPR

Race Inequality between US Whites and African-Americans by the Numbers, Cole 11/14

Inequality and the Case for Unions, Koechlin, 6/14

The New American Economy: A Rising Tide that Lifts Only Yachts, TCF

Income, Poverty and Health Insurance Coverage in the US 2018, US Densus 9/12

Best and Worst Countries for Women, 6/12

Did Income Inequality Cause the Financial Crisis? Landy, TCF 5/12

Striking It Richer:The Evolution of Top Incomes in the US, Saez, updated 3/12

Employment Crisis Worsens for Black Women during the Recovery, NWLC 8/11

America’s Tax System Is Not as Progressive as You Think, CTJ, 4/11

Education is Not the Cure for HighUnemployment or Income Inequality, Mishel EPI, 1/11

Race, Ethnicity and the Economy, EPI

Does America Promote Mobility as Well as Other Nations? Pew, 11/11

Lifting as We Climb: Women of Color, Wealth, and America’s Future, 2010

Lies, Damn Lies and Poverty Statistics: How an archaic measurement keeps millions of poor Americans from being counted, Christopher Moraff, 2/06