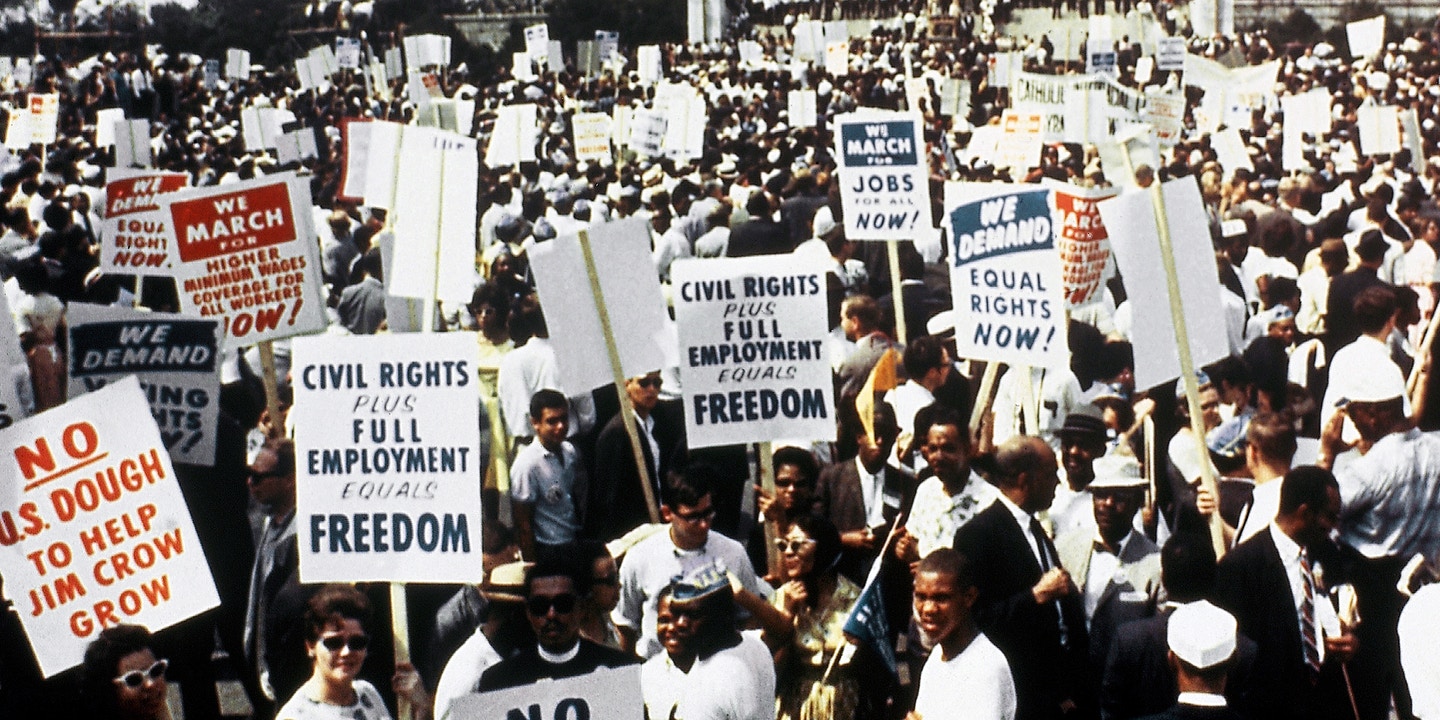 Twice since World War II Congress has seriously considered a federal job guarantee or, as Franklin D. Roosevelt proposed in his landmark Economic or Second Bill of Rights, “the right to a useful and remunerative job.” Roosevelt considered this assurance of living-wage employment the “first and most fundamental” economic right, because it is the “one on which the fulfillment of the others” —to education, health care, housing, and social security—”in large part depends.”

With an end to the Second World War in sight, the Senate passed, by a large majority, the Murray-Wagner Full Employment Bill of 1945.  It was a propitious time for putting an end to the scourge of unemployment. Wartime full employment had greatly benefited the civilian population, and demobilization and the loss of wartime spending threatened a return to the disastrous Great Depression of the preceding decade.  A year later, a more conservative House of Representatives eviscerated the Senate’s commitment to full employment—partly because the feared return to Depression levels of unemployment had not occurred. What emerged from the Conference Committee of the two Houses of Congress was the Employment Act of 1946—with “full employment” significantly absent from its title.

Nearly three decades after this first try, Congress again raised the full employment banner.  In June 1974, Reps. Augustus Hawkins (D-CA) and Henry Reuss (D-MI) introduced the Equal Opportunity and Full Employment Bill. Soon after, former vice president and Democratic presidential candidate Humbert Humphrey introduced an identical bill in the Senate.  These bills included an enforceable guarantee of paid employment, a key goal of current job-guarantee proposals. Most of the needed jobs were to be created through an expansionary economic policy and an expansion of the CETA Public Service Employment Program, with the shortfall made up through federally financed employment in a standby Jobs Corps that would undertake projects designed by local planning councils. The legislation enacted by Congress four years later—The Humphrey-Hawkins Full Employment and Balanced Growth Act of 1978—had full employment in its title but in name only. The Act included a mandate to strive for its achievement after reaching an interim goal of 4% overall unemployment within five years and 3% unemployment for individuals aged 25 and above. But the act included no language permitting suit to be brought against the President or Congress if these goals were not achieved, and even nominal adherence to the bill’s goals was abandoned during the double-dip recession of 1981-1983. At the five-year mark following the enactment of the bill, unemployment stood at 9.6%, more than twice the interim goal of 4% set forth in the act..

How do we account for the failure, despite high-profile Congressional leadership, of these two initially-promising attempts to legislate a commitment to the achievement of full employment? There are a number of possible explanations. One reason was insufficient presidential leadership. President  Harry Truman supported full employment but failed to provide strong and effective leadership for the full employment bill. President Jimmy Carter was lukewarm to full employment, only endorsing it as a nod to left and minority constituencies during his 1976 campaign for the presidency.  The price of his endorsement of the 1978 version was flexibility regarding the achievement of the legislation’s employment and price stability goals—meaning he didn’t want to be obliged to meet them.

Another reason that played a particularly prominent role in undermining political support for the Humphrey-Hawkins bill was the collapse of confidence in the Keynesian full employment strategy during the 1970s as a result of the so-called “stagflation” crisis characterized by simultaneously occurring high rates of unemployment and inflation. Progressives had no agreed answer to the question of whether the Humphrey-Hawkins bill would drive inflation rates higher and, if so, how full employment could be achieved without aggravating the problem of inflation. This eased the way for conservative advocates of “price stability” to compromise the bill’s commitment to full employment by adding to it a commitment to reduce the rate of inflation to 3% after five years and thereafter to zero.

Finally, and crucially, both the 1940s and 1970s legislative effort failed because of the absence of a mass movement or mobilization pushing for full employment legislation. The fight over the bill was fought mainly in the halls of Congress rather than the streets, and the lack of popular pressure from outside the halls of Congress made it easier for the back-room interests that drive the conservative policy agenda to exert their influence over the legislative process.  These political actors viewed full employment as a recipe for rising wages, the promotion of workplace rights, and a relaxation of discipline over the nation’s workforce. A mass movement was needed to overcome this resistance, not just a politically popular proposal.

Public opinion supports the achievement of true full employment, but that does not automatically translate into support for job guarantee legislation. For example, in September 1945, a poll conducted by the non-partisan National Opinion Research Center (NORC) found that 79% of those polled thought it should be up to the government to see to it that there are enough jobs in this country for everybody who wants to work.  However, a July 1945 poll of an Illinois congressional district in which 83% were in favor of a bill resembling the Senate version of full employment, found that only 17% had ever heard of that full-employment bill. This is not to say that the bill’s advocates in Congress made no attempt to mobilize political support for it on the part of progressive organizations, but there was no significant effort to organize public support for the bill.

Efforts at mass mobilization were  greater the second time around, in the 1970s. Especially important was the establishment of the National Committee for Full Employment/Full Employment Action Council, co-led by Coretta Scott King  and Murray Finley, head of the Amalgamated Clothing and Textile Workers Union. The Council brought together leaders in liberal, labor, religious, civil rights, women’s and senior citizens’ organizations–but not the AFL-CIO until the legal guarantee of a job was removed.  The Full Employment Action Council remained largely Washington-based until grassroots organizing began in 1976, with major stimulus from the National Council of Churches, which held conferences not only nationally but at the regional level in a number of cities. The Full Employment Action Council organized a Full Employment Action Week in 1977 that mobilized more than 1.5 million people in protests and actions in 300 cities. Sixty thousand people turned out to rally in Buffalo, but there were no mass demonstrations in Washington—nothing comparable to the mass mobilizations in the 1930s or the civil rights and anti-Vietnam War demonstrations of the preceding decade.

Advocates of a third attempt to achieve a federal job guarantee have their  work cut out for them. We will need to build a mass movement comparable to earlier mass mobilizations supporting  the expansion of civil, political, and economic rights. This time, though, the struggle for a Job Guarantee has an important advantage: the likely partnership of a mass environmental rights movement.  Why?  First, because a Job Guarantee removes a formidable barrier to coping with the climate crisis—the fear of job loss and the lack of an adequate strategy for ensuring that job losers are compensated for their loss with jobs where they live, not just a thousand miles away. Second, a Job Guarantee would contribute a large pool of additional resources to help tackle the transition to a sustainable economy. An updated version of the original New Deal strategy that used programs like the Civilian Conservation Corps (CCC) and Works Progress Administration (WPA) to enrich the nation with an abundance of public goods and services in the midst of the worst depression in the nation’s history.  Today’s Job Guarantee proposals are designed to form an integral part of a Green New Deal.

Job Guarantee Advocates must work with potential allies and constituencies for full employment to build a movement strong enough to achieve the economic right to living-wage work and the right to a sustainable environment. This newsletter is one way to inform the public and to unite potential advocates.  The Jobs for All Manifesto is another means of spreading the word and gaining the awareness of the job guarantee alternative to unemployment and the environmental crisis.  Please help to spread the word.

Trudy Goldberg is Professor Emerita of Social Work at Adelphi  University; Co-chair of the Columbia University Seminar on Full Employment, Social Welfare and Equity; and Chair of the National Jobs for All Network (formerly “Coalition”). For a fuller account of previous efforts to enact a Job Guarantee, see the author’s article, “Trying Again for Full Employment.”